More than just a media type, the magic banner is a robust visual tool that allows you to create animated HTML5 banners with little or no coding. 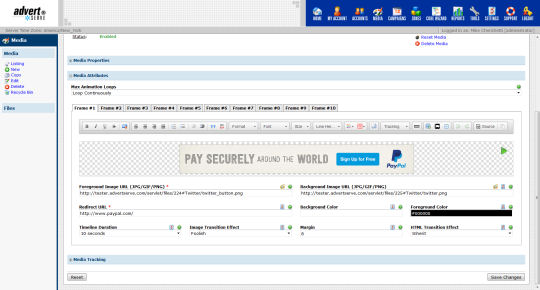 The magic banner runtime includes a massive collection of 60 transition effects, which are implemented with CSS3 keyframes so they are hardware accelerated and super smooth as a result. This also means that magic banners degrade automatically in older browsers such as IE7/8. The need to create a separate fallback banner is completely eliminated, which is a huge time saver!

Of course, the really amazing part is that the HTML, CSS and JavaScript that makes up the magic banner runtime is minified and GZIP compressed to only 8K! It also intelligently pre-loads images a frame in advance to minimize the initial load time and maximize bandwidth efficiency. In non-geekspeak that translates to your HTML5 banners loading up to 6x faster than if they were created with the other guys heavyweight frameworks.

This banner utilizes image overlays for beautiful text as well as custom animation timings on the last frame to make the images slide at different velocities.

Here a simple pan and zoom transition is combined with a sliding image to create a parallax effect, which gives a real sense of movement to the viewer.

Believe it or not, this whimsical banner is composed of just a background image and a button image -- zero coding required.

Magic banners are composed of one or more frames (up to 10) with images in any of the following formats:

The HTML source code for each frame is fully editable, so you can add image or text overlays or tweak the HTML and CSS as needed.

Some restrictions do apply: APPLET, EMBED, OBJECT, IFRAME and SCRIPT tags are not permitted.

Deploying magic banners on your web site couldn't be easier. They drop right into your existing banner zones. There is no special coding required to be done by you or your advertisers!

No need to upload any of the assets for your banner to a separate CDN since we put everything on our CDN automatically at no additional charge to you.