There are many possible causes and sources of fraudulent clicks. In most cases they're not actually performed by humans. Sure, you might have bitter competitors clicking on each others ads here and there, but computer generated traffic is really the major concern here. The proliferation of ad exchanges and programmatic buying and selling has opened the door for bad guys to use various stealth techniques such as botnets or a distributed network of compromised servers to generate fake impressions and clicks. If the potential profits are high enough for them they might even purchase cheap cloud servers from smaller providers all around the world to generate their traffic.

The first step to detecting click fraud is actually to prevent it from occurring in the first place. AdvertServe employs a collaborative blacklist that combines data from our own research, third-party researchers and feedback collected from our customers. The blacklist stops your ads from even being served to the bad guys, so it not only prevents click fraud but impression fraud as well!

This is all happening in real-time too. If we or one of our customers detects some fraudulent activity we can respond and push out a blacklist update to all of our customers instantly. Now that's what we call being pro-active. It's the only way to stay ahead of the bad guys because they're constantly switching hosts, bouncing through different proxies and improving their methods.

How You Can Help

How can you help prevent impression and click fraud you might ask? Well, actually, we've made it really easy for you to help out. Upon logging in to your AdvertServe account you might some day happen to see a warning like the one in the following screen shot. 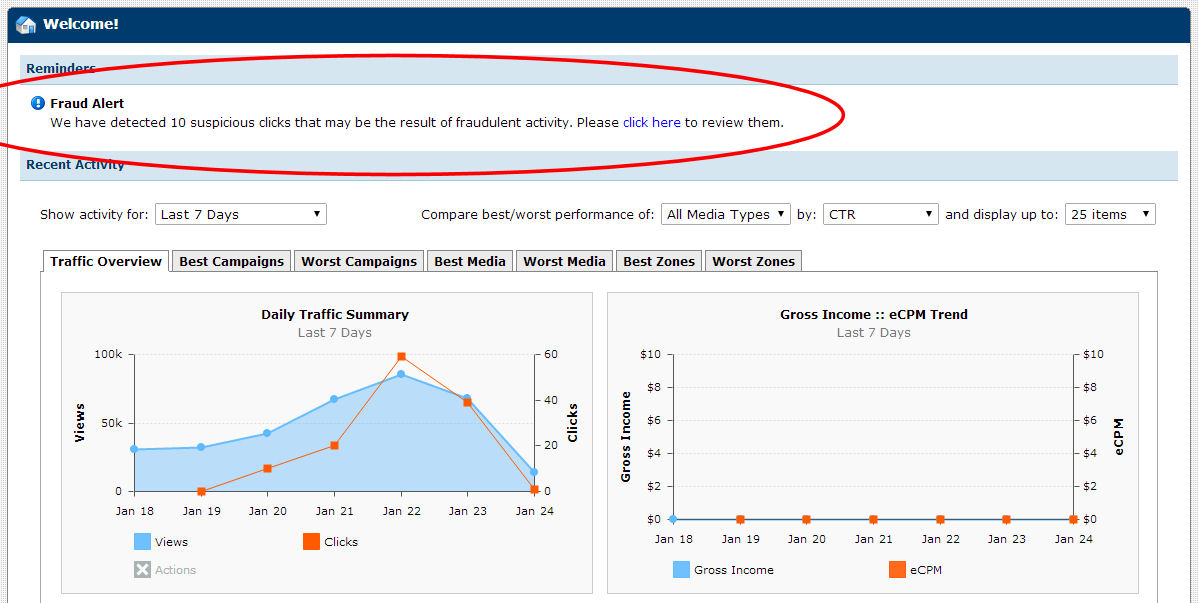 What should you do? The first thing you should do is take a deep breath and don't panic because the situation isn't bad at all. On the contrary, it's your chance to join in and help fight back!

Once in a while we might detect some clicks as fraudulent that we shouldn't have, but it's pretty rare since we only have a 0.57% false positive rate on average.

Most commonly these are clicks by you or some of your employees testing ads on your live web site. There's an easy fix for that. Simply go to Settings > Basic > Server and enter your IP addresses into the Filtering section so your clicks aren't counted.

Some mobile traffic may get detected as fraudulent if too many users behind the same proxy are clicking ads around the same time. While this is rare it does happen. You can tell when this happens because all of the User-Agent's will be different mobile devices. Of course, check the whois reports too and they'll usually say AT&T or Verizon owns that IP network range.

We hope that you never get hit with click fraud and we're doing everything we possibly can with our blacklist to ensure that. If you do get hit with some activity, hopefully you're now a little more prepared to deal with it. As always though, if you need our help sorting it out just let us know!

Mike Cherichetti
Mike Cherichetti is the CTO and co-founder of Renegade Internet. He has been leading the development of AdvertServe since 1998. In addition to computer programming, Mike enjoys playing poker and running racks of 9-ball while his code compiles. He is also addicted to hybrid woodworking and can often be found making sawdust in his shop.
← Consolidated Banner Campaigns
Hiding Responsive Ads →