Nobody likes to get blamed for making an incorrect change to a campaign that they didn't make. Now, you can prove that it wasn't you! AdvertServe tracks changes to user accounts, campaigns, media, groups, zones and more so you can view previous revisions of them and see who changed them.

Having a revision history of all changes made to your data is also of great importance if you find yourself in a situation where someone has compromised a user account and made unauthorized changes. We would be able to look at the revision logs and quickly identify all of the changes that they made to undo them. While these sorts of incidents are rare they can happen (i.e. perhaps your laptop is stolen and has your passwords saved on it) so it's reassuring to know that measures are in place to deal with such critical situations.

Curious to see how the revision tracking works? I suggest that you create a new media and then make a change or two to it and save those changes. After doing so, simply click on the View Change History shortcut that appears at the top right side of the page. You'll see a screen that's similar to the following screen shot. 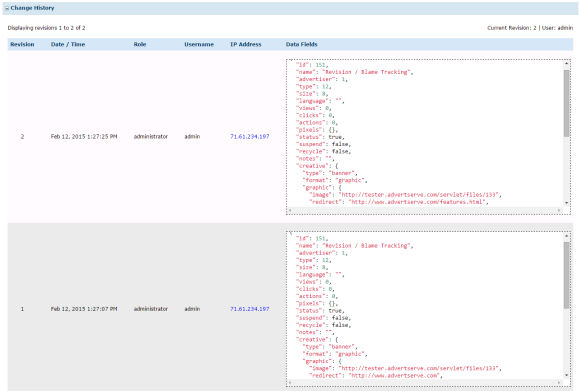 There are three things that you'll notice I've highlighted in the screen shot if you click to enlarge it.

Comparing the two revisions, I determined that the banner redirect was changed. In a future update we're going to be highlighting such changes for you. We're also planning to make it possible to roll back to a previous revision with a single click.

This feature has been a long time coming. In fact, it had been sitting on our list of features to implement for over 9 years. That reminds me that I've been coding away at AdvertServe for a little over 17 years now. How the time flies!

Mike Cherichetti
Mike Cherichetti is the CTO and co-founder of Renegade Internet. He has been leading the development of AdvertServe since 1998. In addition to computer programming, Mike enjoys playing poker and running racks of 9-ball while his code compiles. He is also addicted to hybrid woodworking and can often be found making sawdust in his shop.
← A/B Testing and Optimization
Campaign Renewal Reminders →