We are pleased to announce that the AdvertServe Q1/2014 update has been deployed!

Stay tuned to our blog for the next week or two as we'll be releasing new tutorials on here as fast as we can write them to get you up to speed with the new features.

Campaigns are now able to contain multiple banner sizes, which simplifies distributing a fixed number of impressions or clicks between them. For example, you can now create a single campaign that has 728x90, 336x280 and 160x600 banners. Then you can say that you want the campaign to deliver 200,000 impressions. Those impressions will then be distributed between the banner sizes on a best-effort basis with respect to inventory availability. This not only saves you time, but can also help prevent campaigns from coming up short if inventory is too tight for any of the given sizes by allowing the other sizes to automatically pick up the slack.

We've implemented a collaborative blacklist in an effort to put a stop to impression, click and action fraud.

The blacklist contains IP addresses and User-Agents for open proxy servers, server hosting companies, cloud servers, virtual servers, compromised networks and more. This data comes from many sources. However, it's also going to be growing over time through the collaborative efforts of all of our customers.

One thing we do want to mention is false positives. If we're detecting too many clicks as suspicious, please do reach out to support. While our default detection rules should work well for most users, every site is different. We may simply need to make some adjustments for you. 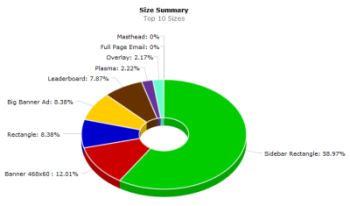 We've expanded our reports for banner sizes. You're now able to generate a banner size report for advertisers, campaigns, groups, publishers and zones. These additional levels of detail should be quite informative, especially if you have campaigns or zones that contain multiple sizes!

The URL Action Code Wizard has been more appropriately renamed to the S2S Action Code Wizard, which makes its intended usage much more clear. You'll notice we're now outputting a [uuid] placeholder where the third-party ad server should insert the UUID they received by passing our %%UUID%% macro through their serving tags. We're also resolving the visitors IP address, language and User-Agent on the server-side now, so it's no longer necessary for the third-party ad server to pass those values with HTTP headers as has been required in the past.

We'd love to hear from you. Seriously, don't hesitate to contact support if you have questions about any of the new features and improvements.

Mike Cherichetti
Mike Cherichetti is the CTO and co-founder of Renegade Internet. He has been leading the development of AdvertServe since 1998. In addition to computer programming, Mike enjoys playing poker and running racks of 9-ball while his code compiles. He is also addicted to hybrid woodworking and can often be found making sawdust in his shop.
← Multilingual Campaigns
Consolidated Banner Campaigns →